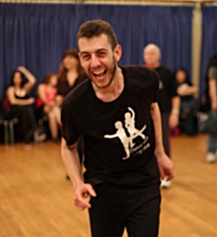 Elad Shtamer was born in 1984 in Haifa and started dancing at 5 years old in his father's classes. He danced for 12 years in the Haifa Dance Troupe, led by Barry Avidan and performed in many festivals in Israel and world-wide. Elad started teaching and leading Israeli Folk Dance sessions at 15 years old and hasn’t stopped since. After 5 years of military service, Elad went back to leading sessions full time as well as choreographing Israeli dances and teaching in dance events all around the world. In recent years, Elad started performing as a singer and guitarist in sing-a-long events, concerts and dance events both solo and alongside Ori Harpaz (from the Parvarim duo) Elad is known for his teaching and social skills, session leading, programming and for his dances like Ilan, Bein Ko Vacho, Hashiveinu, Toy, Lifnei Kama Dakot, Et Lirkod, Baderech Levietech, 1000 Dinar, Ha'ish Im Hakova and many more… If you are in Israel, make sure to visit Elad's session in Ra'anana which is one of the largest in the world Outside of dancing, Elad is a software engineer and a Python development college professor. He specializes in teaching beginners without any programming background, both adult and children. Recently, Elad and his wife Michal, an accomplished dancer in her own right, became parents to young Amilya who has filled their life with happiness 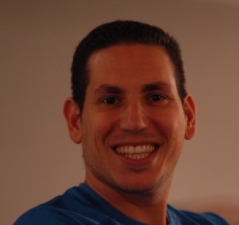 While serving in the army, Eran opened another dance session in Tel Aviv. When he finished his army service he opened his dance session in Ashdod. The group meets on Wednesdays and is still dancing today, eleven years later!

At the age of 23, he choreographed the popular dance Me'ever Lamasach. Two years ago, Eran Bitton choreographed Mahapecha Shel Simcha. This circle dance turns into a line dance, and then back into a circle dance—something that was never done before or since!

Eran has travelled the world teaching Israeli dancing in Belgium, England, Switzerland, Australia, Hungary, Romania, and the United States. Eran Bitton lives in Kibbutz Galil Yam, near Herzliya, and is married to Tal Bitton. They are the proud parents to daughter, Inbar and son, Or. 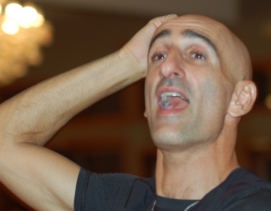 Dror Davidi was born in Karmiel, the Dance Festival City. He spent ten years of his youth dancing with a local dance troupe led by Dado Kraus, a leading dancer choreographer, where he was the lead dancer. Dror says his time with Dado Kraus was filled with wonderful experiences in Israel and the world. In addition to dancing with the troupe, Dror also enjoyed dancing in several weekly dance sessions throughout Israel.

After finishing his military service, Dror led salsa and jazz dance groups, and began to teach Israeli Folk Dancing at Yaron Carmel’s dance sessions. This is when he reconnected with Yaron Carmel.

Currently, Dror runs two dance sessions: one in Kibbutz Afikim on Mondays, and one in Kibbutz Gan Shmuel on Wednesdays. Both sessions host 200 people. In addition to the weekly sessions, Dror founded several dancing schools and continues to consult with the local dancing instructors. He is also the producer and artistic director of several municipally and privately funded dance and poetry performances.

Dror is married to Gila and they have three children: Noah, Yonatan, and Ariel.

Dror earned his Dance Instructor certification from Tel Aviv University and the Department of Education in 2003.

Phil Moss became an active Israeli dancer during his college years and started teaching as a summer staff member of the Olin-Sang-Ruby Union Institute (OSRUI) in Oconomowoc, WI. Known locally, nationally, and internationally, Phil has been leading Israeli Dancing in Chicago since 1974. For most of that time his weekly Thursday night group met at Northwestern University. The current home for this session is Congregation Beth Emet in Evanston.

During the times of the pandemic, Phil was one of the earliest pioneers/proponents of using Zoom to keep the Israeli dance community, both locally and globally, dancing and connected. His weekly zoom sessions have been recognized throughout the world as helping to keep Israeli dancing alive and for helping to create and maintain wonderful connections for all of us. Phil also was the driving force and organizer behind both incredible Worldwide 24 Hour Israeli Dance marathons.

Phil is a tireless promoter of Israeli dancing, having brought the joy of this form to literally generations of kids, teens, parents and seniors. He is active on a national and international level in the leadership of Israeli Dancing from an organizational and promotional perspective. Phil truly can be viewed as a charter member of the who's who in Israeli dancing. Phil is very grateful for all the support and encouragement he has received regarding the creation of and running of Machol Merkaz and for the team that makes it happen.